The small town of Latacunga an hour and a half south of Quito will hold its annual Mama Negra pageant on Saturday the 9th of November, 2013.  This is a very popular and colorful celebration which is held on the second Saturday of November each year. The festival is also known as De La Mama Negra and Fiesta del Capitana.

Integrating the Spanish, Incan, Aymaran, Mayan and African cultures and in more recent years the gay community it becomes a festival of mixed diverse traditions and a huge public celebration of pride and is known to be one of the most fascinating cultural events.

The festival can be traced back to the 1700s when the Spanish first colonized Lacatunga as it was very rich in mineral resources.  This led to the natives of the area involuntarily converting to Catholicism.  As can be imagined it was not totally accepted by the indigenous locals.

It is said that when the Cotopaxi volcano erupted the people petitioned to the Virgen De La Merced (Virgin of Mercy) the patron of Cotopaxi.  Lacatunga was saved and so they began a yearly celebration in her honour. 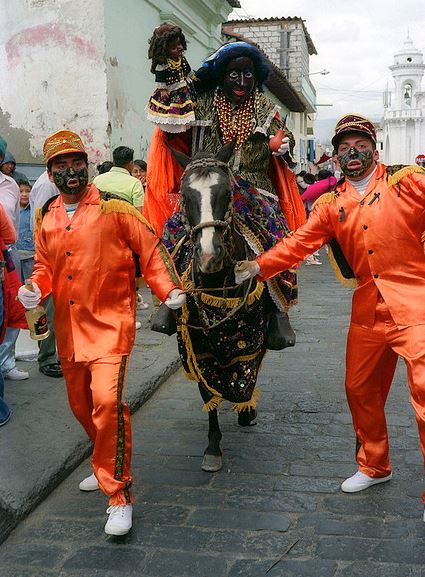 The parade is made up of an array of people such as the Angel of the Stars and the Captain of the Guard and attracts some of Ecuadors best performers, dancers, marching bands and musicians.  The grand finale sees the arrival of Mama Negra on horseback who is a combination of the Virgin of Mercy and African deities.  The doll she carries represents her daughter and symbolizes unity and brotherhood.

But be warned as one of the custom is to spray water and milk on those participating in the  parade while wine and candy are thrown to the crowd.

This is a happy and delightful celebration and as like all Ecuadorian festivities food takes a prime position.  Restaurants serve what is called Chugchucara.  Deep fried pork, boiled hominy, empanadas, popcorn, potatoes, fried plantain, corn and pork rind.  You will probably find that this is a dish that is served at many fesitivals in Ecuador.

Homemade strong alcohol is freely passed around between revelers but be warned if you have not tried it before it may give you quite a kick.

The Mama Negra festival is one to attend if you can, as it celebrates different cultures, traditions and religions in such a happy way and this in itself is unique a great attribute to the wonder of the Ecuadorian people. 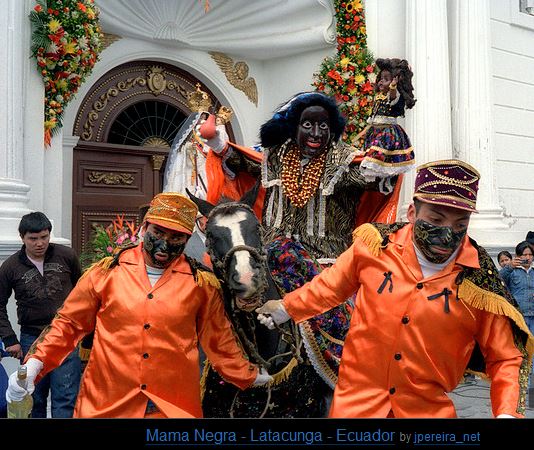 According to Wikipediathis fesitval is celebrated twice a yearly.  The first being in September organised by the people from the markets “La Merced y Del Salto” in honor of the Virgin because she stopped the Cotopaxi Volcano eruption in 1742 and the second is celebrated on Independence Day although other sources say it is celebrated on the second Saturday of November.  This would also coincide with Ecuadors Day of the Dead.