A little bit of history on Cuenca 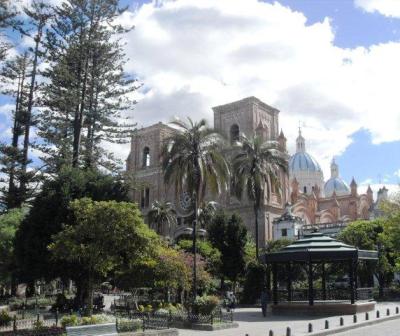 Cuenca has been called “the Athens of Ecuador” by some writers on the internet. I think that is a very good introduction to those of you who are thinking of coming to Ecuador. It is the third largest city in Ecuador.

The city is a must see for anyone touring Ecuador. It is located in the southern half of the country and is known as the economic and cultural centre and the capital of the province of Azuay.

It was recognized as a UNESCO world heritage site in 1999. The population is around 400,000 and the city is approximately 8200 ft above sea level. This city is a blend of old colonial and also modern-day facilities.

Four rivers wind through the town. There are many beautiful homes perched along the rivers Yanucay, Tomebama, Machangara and Tarqui. It is a daily activity for local women to do their washing in the rivers.

Cuenca has many beautiful churches, and the city is adorned with homes decorated with ironwork balconies and the streets are cobblestones. Cuecanos are very family orientated, culturally conservative, promoters of the arts, and many cultural and artistic events can be found at any time in the city.

Cuenca has eight universities and the most prestigious is the Universidad de Cuenca (University of Cuenca) a state school of about 12,000 students. This is the home to poets, writers, artists and philosophers

As the Cuencanos are family-orientated and live a leisurely pace it is not uncommon to find businesses and public offices closed between 1-3 p.m. being the lunchtime hours. Most employees can go home and have lunch with family and friends. You can always find a restaurant which will serve the “Menu del Dias” anywhere between $2.00 – $3.85 for soup, main course, small salad and dessert.

A brief search on Cuenca’s history shows that it has been named various times throughout its history, depending on whose control it was under. The first settlers, the Canaris indigenous group, named it Guapondelig, (“land as big as the sky”). City was renamed Tumipamba (“plain of the ridge”) after the Inca conquest.

The Spanish explorer Gil Ramirez Davalos founded the city in 1557 and called it Tomebamba. The Spanish then renamed the town “Santa Ana de los Cuatro Rios de Cuenca (Santa Ana of the Four Rivers of Cuenca). So it has become and remains this day as Cuenca.

Cuenca regained its independence from the Spanish on November 3rd 1820. We have just celebrated the “Nacional Day” with a three day celebration and processions, outdoor dancing and displays by Artisans from throughout Ecuador.

You can find out more interesting information by checking Wikipedia.