Salinas Ecuador is not for everyone.

by Josh from Viva Tropical 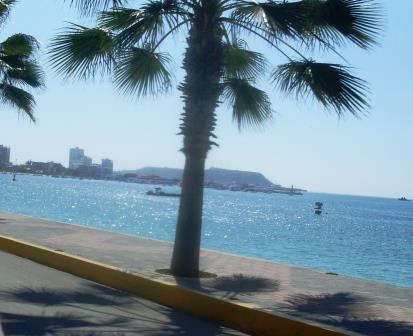 There are many things you could say about Salinas, Ecuador.  And comments from first-time visitors often fall all over the spectrum, from fabulous to formidable.  And everything in between.

Indeed, to say this resort town is polarizing would be a gross understatement.  It’s a place of stark contrasts, from its reception by travelers to its weather to its varying influx of tourists as the seasons change. We’ll give you the lowdown about what there is to love and hate about this South American beach community, but first here are the facts about Salinas, Ecuador.

Salinas is located 90 miles from Guayaquil, a bustling port city and Ecuador’s largest.  The beach is divided in half by a jetty, which houses the Salinas Yacht Club.  To the north is Salinas Beach, and south of the jetty lies Chipipe Beach which has a little bit more of a family atmosphere.

It’s visited mostly by Ecuadorian families who come down for the weekend.  However it also draws some of Ecuador’s elite, particularly those who come to the yacht club.  It’s also popular among newlyweds and could be equated to a Hawaiian honeymoon for an American couple. 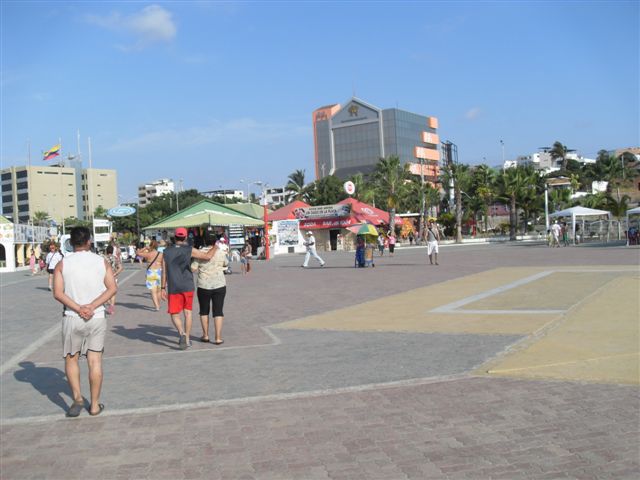 First things first.  There are some really great things about Salinas, Ecuador.  Best of all would have to be the price tag.  Salinas offers some decent amenities at a lower cost than you’ll find almost anywhere.

You can get a hotel room for $30 per night, a steak dinner for $6, and as much fish or shrimp as you can eat–prepared any way you want it–for $3 at the market.  Even property prices are reasonable, as a 3-bedroom/3-bath condo (with a maid’s quarters) in one of the impressive high-rise buildings will only set you back about $130,000.

Note, you’ll probably only want to use that condo during November through January when the weather is gorgeous.  Not so much the rest of the year.  But we’re getting a little ahead of ourselves…

The good news is that you shouldn’t have any trouble renting your place out to some Ecuadorians who live in the surrounding areas.  Many like to visit Salinas in June to September, when their kids are out of school.

Rounding out the “good” list, Salinas also offers a lot of water sports and activities.  At least during the peak season, which is generally December through April.  You can charter a boat for game fishing or whale watching.  Adventure companies offer skydiving and parasailing.  You can also try surfing or wakeboarding. 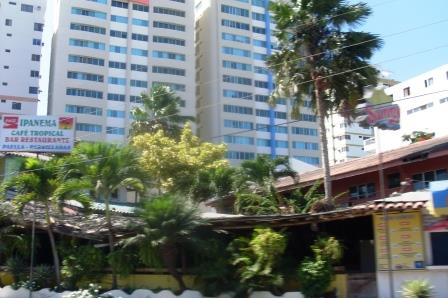 As we mentioned, the weather in Salinas, Ecuador is really, really nice during the high season.  As a result, tourists flock to it in droves.  It looks like Miami in that sunbathers literally line every square inch of the beach.  Well, except the part just off the promenade that’s littered with millions of painful, sharp broken seashells.

In addition to the crowdedness, or as a result of it, it’s incredibly noisy.  And dirty.  Cars crawl along the crowded streets, bringing in even more tourists.  Street vendors line the malecon, the beachfront esplanade, hawking everything from souvenirs to shrimp on a stick.

Hosts of businesses and brands also line up to capitalize on the opportunity to market to thousands of visitors all crammed into one place.  Inflatables and advertisements are everywhere, and virtually every exposed surface in town has someone’s logo plastered on it. 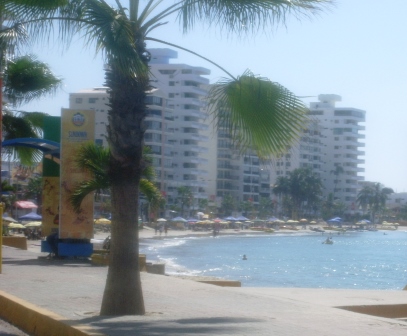 So, that’s Salinas, Ecuador in the peak season.  What’s the off-season like?

The crowded, bustling beach is virtually empty, and the place turns into a ghost town.  And all for good reason.  The beautiful weather of the busy season is replaced by chilly temperatures, and the sky is overcast almost every day.  This often comes as quite a shock to unsuspecting tourists, many of whom have gone so far as to describe the scene as “depressing.”

Many visitors to Salinas are also disappointed in the availability and quality of shopping and dining.  This sparseness is even more exaggerated during the off-season when a lot of businesses that cater to tourists don’t operate.

There isn’t even a decent supermarket in Salinas, as the nearest one is 10 minutes away in La Libertad.  This presents a bit of a problem, since safety can be a bit of a concern the farther you venture from the beachfront resort area.

During the peak season, the tourist area is patrolled by a whole battalion of police officers and private security guards.  But the area farther from the coast is industrial and impoverished-looking.  Again, quite the contrast from the glitz and glitter of the coast.

Then again, much of Ecuador’s coast is undeveloped.  So, the amenities and infrastructure are about what can be expected for a city this size.

Salinas is a really great deal.  But it’s only a great deal if you’re prepared to deal with overcrowded beaches, underwhelming food options, and nothing but tumbleweeds blowing down the street in the off-season.

If you’re looking for a serene, tropical paradise where you can lie undisturbed on the beach and enjoy the scenery year-round, this isn’t it.

To read more articles by Josh from www.vivatropical.com